A report of GP1

First of all sorry, we did not closed the previous season in a news: not much to say, but thank You for all of You teams from outside of Hungary, travelling loads of kms to get to our competitions, and also congratulations for those who are receiving medals, good placements, or simple just expereinces! We are glad that we’re all here together, for each other!

We weren’t quick writing this report. We’ve got tired during this huge season opening, which this time have really been a Grand Prix, a Big Cup. We all participated the most crowded competition in the history of Olimpici GP since 2006, becasue this time in the eight competitions 758 athletes have been registered by the organiser Békessy Béla Fencing Club, which has been organised with its usual routine, and operated the event. Congratulations!

We also congratulate a young man who could be heard first time during of the GP in Hajdúhadház: Máté Lasztovicza was an Olimpici-fencer, later an Olimpici-referee, then became a proper, adult referee. He is now practising with his mentor János Vida, how to be a proper member of the Directoire Technique. Mr. Vida going to retire soon, and we would like to know somebody young, reliable in our team. As he is like that, welcome Máté on board!

During Olimpici-seasons our GP has become quite popular for Hungarian and also for foreign fencers more and more, and now we have reached a critical point in number of participants. This can, and will pushing us to change its organisation in some ways in the future.
We see the critical corners, and we promise we think over where to go meanwhile carefully protect the competitors and our targets. In this we kindly ask your patience, not an easy issue, but either the next invitation letter will be effected.
One thing is for sure: we cannot create such a competition which is suitable for all: athletes, coaches, parents. Resented have always been around, and will be. But we have our goal, which is still following and keep up with the values of Győző Kulcsár’s ars poetica, and so Olimpici GP.. the prime goal is working for the future of hungarian épée. 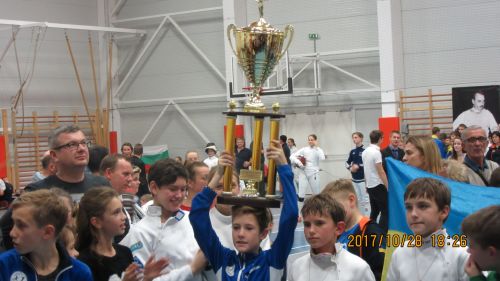 Boy’s cup is overhead: the winner is Matvei Kozhevnikov, UKR

Also an important news that we would like to motivate the most younger fencers with a new pair of rover cup. The newly founded cups were awarded first time in Hajdúhadház: the cup of mini boys is sponsored by the Hungarian Men’s Épée Team, and the cup of mini girls is sponsored by Péter Semerédy, who is a father of a son and daughter from the crowd of Olimpici athletes. Mr. Semerédy is supporting the Olimpici Public Fundation for five year with the sum of 100000 HUF. So, we proudly pronounce that the founder of mini girls’ rover cup is the Semerédy Family. Their generosity is exemplary!

The cup of boys were handed over by Péter Somfai, represented the Hungarian Men’s Épée Team 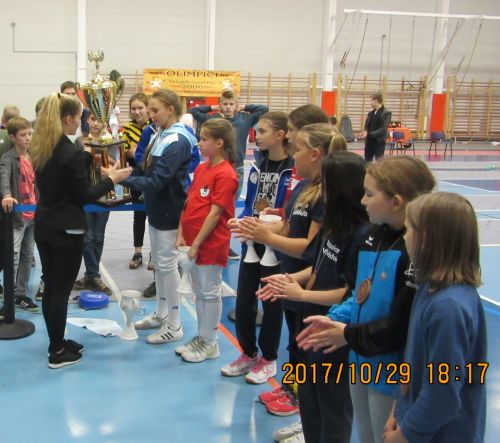 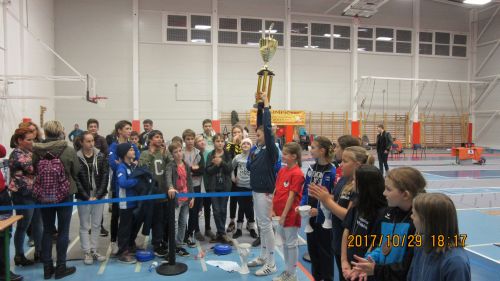 The girls’ cup is overhead: the winner is Veronika Kravchuk, UKR

The documentations and photoalbums are already available. At this moment  only the final results act as ranking lists , but soon will be done too, as the invitation of GP2.

We could not hand over two LuckyPi System PBT-vouchers:
In kid girls: Jakobi Júlia, PTE-PEAC; and a novice girl Marusenka Maryana, Belarus has won a 10000 HUF voucher. At the next competition please turn up for it at the DT.